Development History of the Musketawa Trail

In May of 1990, contact was made with, then State Representative, Nancy Crandall as to the future disposition of the unused railroad corridor that ran between Marne and Muskegon. Nancy responded with information from the Michigan Department of Natural Resources (DNR) that this stretch was being considered for purchase. It was envisioned for development as a rail-trail to be linked with other trails in a statewide network. In November of 1990 an article appeared in the Muskegon Chronicle referring to the proposed “bike path”. The article stated that in order to proceed an agreement had to be reached with Kent, Muskegon and Ottawa Counties. A meeting with the DNR and the Muskegon County Planning Commission came to the conclusion that a partnership had to be formed primarily with Muskegon and Ottawa Counties. The possibility of having a “trail commission” manage the trail was also discussed.

Public meetings were held for the next two years. The trail was discussed in many forums and with numerous groups of people. A trail advisory board was formed. It was made up of representatives from Muskegon and Ottawa Counties from different user groups and local residents. In May of 1993 the Ottawa County Board of Commissioners approved the master plan for the development of the rail-trail. The Muskegon County Board of Commissioners was much more reluctant to commit due to the fact that operational costs had not yet been determined.

In December 1994 the DNR was awarded a $250,000 grant from the Natural Resources Trust Fund to start development of the trail. Ravenna Village President, Harold Drake, helped secure the grant by expressing his community’s support for the trail. In early 1996 a phone conversation between Harold Drake and Joel Mikkelson of New Era resulted in the formation of the group now known as The Friends of the Musketawa Trail. Joel was heavily involved in the development of the Hart-Montague Trail and brought a wealth of experience to the group. The first meeting was held on April 25, 1996 at the Ravenna Village office and attended by about 25 people. Since then membership in the Friends group has grown to well over 100 dues paying families, individuals, businesses and organizations. A core group of a couple dozen volunteers has been instrumental in completing many projects along the trail.

One of the first projects was a “name the trail” contest. The Musketawa Trail was chosen from many entries and the winner awarded a new mountain bike. The name was derived from a combination of Muskegon and Ottawa. If you stretch your imagination you can also see “Kent” which is were the trail will eventually be extended to. Other projects completed by the Friends group include the bridge decking and overlooks, information kiosks, tree plantings, brush clearing and picnic tables. It has also coordinated other groups interested in the trail by establishing an adopt-a-trail program and supporting a Eagle Scout candidate with his project that expanded the Black Creek Trestle overlook.

The DNR has stated that, without the persistent support of the Friends of the Musketawa Trail, it would have been many more years before the trail was completely paved. The first mile of trail was paved in Ravenna in 1997. The following year the eastern half between Marne and Ravenna was completed. Muskegon County’s reluctance to support the trail resulted in their section between Ravenna and Muskegon being paved last in late summer of 2000. A trail dedication was held on September 30. A pair of retired gentlemen can be spotted doing volunteer trail patrol and cleanup in their golf carts. The West Shore Snowmobile Council grooms the trail for snowmobile use during the winter months.

The area along the trail is home to a variety of plants, birds and animals. Deer, wild turkey, snakes, coyote, a bear with cubs and even an escaped emu have been spotted along the trail. The trail has also hosted special events such as a wagon train and several benefit rides (such as four Gold Spike Trail Tour events) and walks. The Michigan Chapter of the Rails-to-Trails Conservancy’s Michigander Bike Tour has used the trail several times as part of its annual cross state ride. Future plans for the trail include becoming part of a statewide trail network. The west end will eventually connect to the Hart-Montague Trail via the Laketon Trail and the Fred Meijer Berry Junction Trail and the east end will be extended into Grand Rapids via the Fred Meijer Pioneer Trail to connect with the White Pine Trail, Kent Trails and Paul Henry-Thornapple Trail. 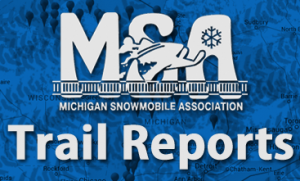